A Tale of One Sunset and Two Photos

Two of my recent posts have featured the same cornfield and the same sunset, and it’s interesting to look at the two photos side by side. Keep in mind that they were taken from the same general location along the edge of the field. The photo on the right was taken 20 minutes later and is much more literal. You’d easily identify the subject as a corn field, at least you would if you’re from the Midwest. The photo on the left is more abstract. If you were to see it from across the room, you’d probably identify the sunset component, but perhaps not the corn. In fact, your first impression is probably related to strong colors and the geometry of the photo rather than the subject. 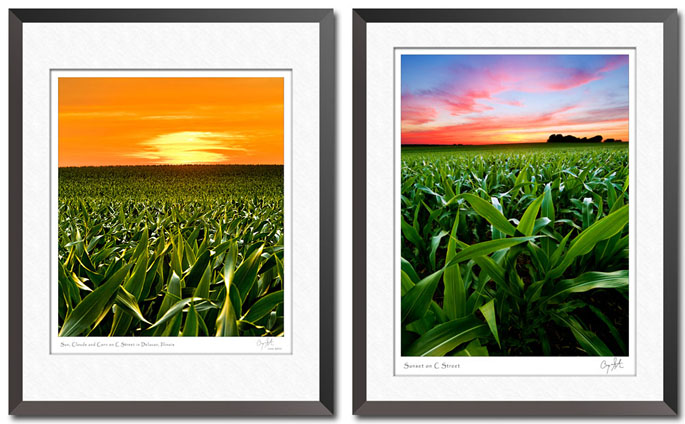 The two photos have a lot in common. Both are vertical orientations. Both feature a cornfield in the foreground and a sunset in the background, with the sun’s hotspot in about the same position. Both are framed with the horizon about 1/3 of the way from top, so they’re 1/3 sky and 2/3 foreground. (As a general rule, you don’t want the horizon line to be in the center of the frame, but rules are made to be broken.)

In terms of timing, the photo on the left was taken 20 minutes before the one on the right. The important point of the time is that the first photo was taken about one minute before sunset, and the second was taken about 19 minutes after sunset. As a result, the colors are quite different. The earlier photo is heavily influenced by the strong yellow light from the sunset streaming across the cornfield, so there is a yellow glow throughout. In the second photo, the field is lit mostly by the blue sky above, so everything has a much cooler feel. One effect of that is that there is a strong contrast between the cool colors of sky and field and the red and orange glow of the clouds. So, the first photo has harmonizing colors while the second has contrasting colors.

The other big difference is the choice of lens. The earlier photo was taken with short telephoto lens at 105mm, so the scene is compressed and the sun’s hot spot is shown prominently. The later photo was taken with a 14mm extreme wide angle lens. Even with the vertical orientation, the frame encompasses a large area of the horizon. I particularly like the effect of the wide angle lens. Since the camera was so close to the leaves, it gives you a sense of being in the cornfield.

I have a passion to create, and I'm fascinated with the tools and technologies of creativity. I strive to produce images that are graphically simple and technically precise in order to render beautiful photographic fine art prints. I work with a variety of digital transformations to create a finished image that reflects my artistic interpretation.
View all posts by Craig →
This entry was posted in Photography, Recent Work. Bookmark the permalink.

One Response to A Tale of One Sunset and Two Photos